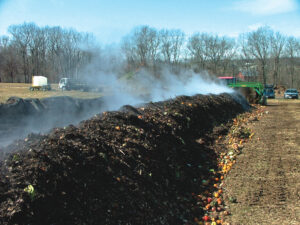 Main target of the activities described in this article is the evaluation of the applicability of an electronic detector to the ends of the discrimination/quantification of odours generated by foundry plants and emitted into the surrounding environment. To this end, air samplings were carried out by the foundry Scm in Rimini in November and December 2012, for which the experts of MIST E-R (Laboratory of Industrial Research and Technological Transfer of the High Technology Network of Emilia-Romagna Region) used one of the two samplers kindly provided by Sacmi for this testing.
The electronic nose Sacmi Eos835 is a gas detection device composed by a chemical sampling system and by an array of sensors, sensitive to a wide range of chemical compounds, so that the whole of their responses represents a characteristic pattern for each chemical mixture. The array of sensors is housed in a measuring chamber made of chemically inert material (PVC, glass or stainless steel), where a reference gas (synthetic air or nitrogen flows and it is used to establish a base line for the sensors’ response. The device contains also a sampling system, the measuring chamber and the array of sensors; last but not least the whole electronic equipment needed for their operation and their interfacing (feeders, heaters, ohm-metres, digital analogue converters and interfaces for the transfer of the trend of their conductivity in time).
The samplings were carried out in two different sessions, performed at a distance of 20 days, directly from the chimneys called E7 and E8; this in order to train the electronic nose to recognize, if possible, the two types of odours. They also executed air samplings in five characteristic points of the factory (office entrance; loading yard; Lazzarini square; carbide deposit; first testing area) with the aim of verifying the electronic nose’s ability in assessing the odorous content in the air surrounding the plants.

From PCA to dynamic olfactometry
The data were analysed by a PCA analysis, that’s to say an analysis of the main components, whose graphic highlights that the air measures are all located in the E7 characteristic area.
The recognition was instead accomplished through the Nose pattern classifier software, still supplied by Sacmi as instrument equipment. In the examined case, the parameters on which it is possible to carry out the recognition are two: the odour type (E7 or E8) and the intensity (100%-25%). By performing recognition only on the odour type we can find, as predictable, an approximate 80% correspondence with E7 for all five samples.
If we try instead to execute recognition on both parameters (type and intensity), the software supplies only the first three correspondences detected, implying that the successive ones have a percentage correspondence with the reference sample that is inferior to the lowest one among the three shown. It is worth noticing that, although an electronic nose offers notable advantages, like the possibility of executing a continuous monitoring and needs a single operator, at the present state of the art a dynamic olfactometry measuring is needed to calibrate the instruments, to be carried out on the same samples used for training. As a matter fact, an electronic nose has no possibility of establishing a relationship between the complex mix of gases that it analyses with a typically human parameter like odour, unless you introduce a relation between electronic and human parameters. The dynamic olfactometry measure can be used to this purpose since it provides a quantitative evaluation, in terms of OU/m3, of the odorous content of the samples used to train the electronic nose. In this way each different pure odour source is characterized by the intensity in OU/m3, and therefore each dilution carried out for training has an odorous intensity calculated according to the dilution itself and to the pure source intensity.

Conclusions
The analysis described here has provided encouraging results concerning the applicability of the electronic nose to the issue of the quantification/ discrimination of the odours produced by plants and emitted into the surrounding environment. We have seen that the air samplings outside the plants are put in relation with source odours by the classification software plausibly and consistently with the dynamic olfactometry measuring performed, and with the fact that picking points are distant from chimneys.
It is anyway worth underling that this survey should be considered preliminary. It was in fact highlighted that the dilutions of pure odours (used to train the instrument) should be significantly inferior to the minimum one used (25%), especially concerning E8 that has much higher odour intensity than E7. In that way it would be possible to verify whether the instrument is, or not, able to distinguish the two sources. To provide the intensity assessment expressed in OU/m3 it is anyway necessary that a laboratory of dynamic olfactometry carries out measuring on the same samples to be used for the nose training. Therefore, what described is still exactly what we need for the instrument commissioning. As far as its limits are concerned, the producing company has informed that it is affected by drifts determined by the temperature and wetness variations (on which they have worked for the new generation of electronic noses). Nevertheless, in the course of the measuring performed, these peculiarities haven’t created any relevant problem, probably because measures were carried out in a quite short lapse of time, during which both these parameters have maintained very similar values. 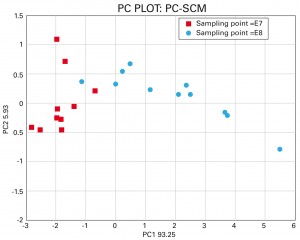 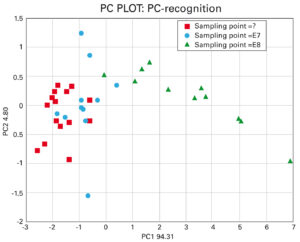