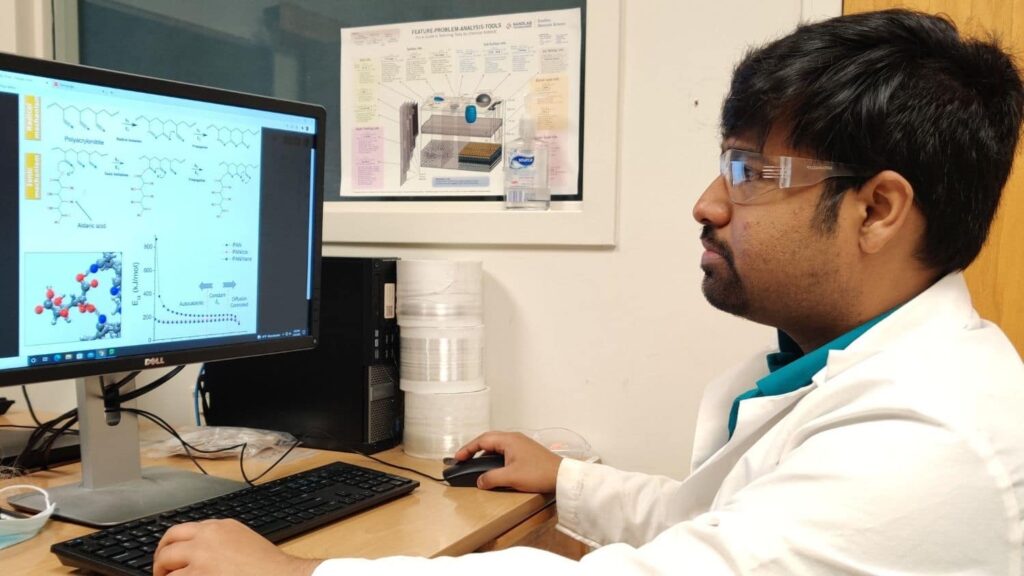 In a new study, North Carolina State University researchers found a way to improve the energy efficiency of part of the process for making carbon fiber—a strong material sometimes used in place of steel to make lighter and potentially more fuel-efficient vehicles, airplanes and other products

In the Journal of Applied Polymer Science, researchers reported results from an experiment where they added two biologically derived chemicals found in certain fruits into a precursor material for carbon fiber. They found with the addition of the two chemicals, starting the chemical conversion process of making carbon fiber required less energy. The chemicals are sugar acids called glucaric acid and mucic acid.

“There is an increasing demand for carbon fiber, and when it comes to low-cost fiber, one of the leading applications is for use as a structural material in vehicles,” said Ericka Ford, assistant professor of textile engineering, chemistry and science at NC State. “In this study, we found that by adding the two chemicals into the precursor material, we can potentially reduce the amount of energy required to complete one stage of the manufacturing process for carbon fiber, and help bring down some of the cost.”

Before they used the chemicals in the lab, researchers turned to computer modeling to get a preview of what would happen when they added the two chemical compounds to the precursor material. Their interest in the chemicals was initially piqued after one of them, glucaric acid, was listed by the U.S. Department of Energy as a chemical of industrial significance.

“We were interested in understanding how these chemicals would interact with the precursor material, so using computer models and simulations we were able to look at their interaction parameters before we even started lab work,” said study co-author Hannah Dedmon, an NC State graduate student. “We’re able to slow things down and zero in to look at atomic-level details, which we are blind to in the lab.”

Then, they experimentally tested making the precursor material, a plastic material called polyacrylonitrile (PAN) that is sometimes known as an “acrylic.”

The process in details

The process of making carbon fiber out of PAN is a “spinning” process of first making very fine filaments—like making cotton candy, or like a spider spinning a web, researchers said.

First, they make a gel-like material that has a consistency similar to honey. Then they push the “honey” through a tiny needle to transform into a small filament, like a tiny hair. Then, they heat the hairs to very high temperatures. That heating process helps convert the PAN filaments into a structure that forms the basis of the carbon fiber.

The additives decreased the energy required to start the chemical process of making the carbon structure from PAN five-fold. Researchers say that could also reduce the overall cost of that step of the manufacturing process by making the reaction faster.